A few weeks back I got an email from Google saying they were graciously sending me Logitech Revue. Being a developer, I was incredibly excited to see what the possibilities were with such a device. I attended Google I/O 2010 where it was announced, and the excitement being there hearing about this new technology was incredible.

The GoogleTV is a reasonably small sized device with an awesome keyboard. It’s got an HDMI in and HDMI out. It’s relatively easy to plug in, and setup.

I don’t have any pictures, but GoogleTV will ask for your TV and set-top box make and model so that you can turn them on and off from the keyboard. The keyboard has the main controls on the right side, including a touchpad, and you typical Android Back and Home buttons as well as Favorite and Picture-In-Picture. It’s nice sized and light enough that it won’t really bother you even though it’s huge compared to your typical remote.

After a few updates installed, you’re presented with a nice home screen:

UPDATE: I also wanted to mention that you can install an Android app that also functions as a full controller for the GoogleTV. Kind of fun to have multiple remotes for the TV when someone says “Oh we should watch this Youtube video!!” they can do it. People can take turns and kind of makes the TV more interactive in that way. (Thanks to Google for providing 2 Android phones and the GoogleTV

Quick links to LiveTV and your other bookmarks make it easy to navigate, but the grid isn’t too intuitive for a keyboard. The installed applications are somewhat sparse. I would have liked to see more, but it’s enough to get you by for a while. Google Chrome functions beautifully as always but CNBC, NBA, Pandora, Twitter, and Napster are about the only third party applications included. While they’re pretty nice, I would have liked to see more. There isn’t any app store which certainly makes the experience feel incomplete as I use an Android phone on a daily basis.

Now one thing I didn’t get to test was cable integration. Apparently you’re able to search through upcoming shows, streaming video, and even set them to record if you have a DVR (doesn’t support the Tivo). I’d love to test that, because I think that is what would make this device really shine.

I’ve only got a TV antenna, so I wondered how things would work out with that. Right now we have a VCR/DVD player that the TV antenna goes into. It was as simple as plugging that into HDMI in on the Revue, setting “Generic Video Source” on GoogleTV and it was ready to go. I still have to control the channel with the other remote, but everything is streamed in nicely. Picture-in-picture is awesome for browsing the web in between commercials. GoogleTV also includes support for Amazon Video On Demand so you can purchase content through there as well.

It’s nice to see a Boxee style approach, as GoogleTV has a lot of online TV networks like Revision3. Along with online content, the Logitech Media Player application supports streaming media over UPnP. This is great for the more technical people, but certainly a mess to setup if you’re not. I spent a while just trying to figure MediaTomb and over wireless it was fairly jumpy. One of my favorite features of XBMC is Samba support, so simply sharing a folder is all you have to do. Maybe this is something that will be implemented in the future, maybe not. I would like this to be a feature of GoogleTV itself as well, not something Logitech provides.

Last but not least, wifi seems to have some problems. I can’t quite figure out what’s going on exactly, or if it’s my network causing the problems. The problem is that leaving the device on for a while not in use, the device loses connection to wireless permanently. Disabling and re-enabling wifi like I have to do occasionally on my Nexus One doesn’t fix the problem on the Revue. It just gives an “Unable to search for networks” and the only way to fix it is to power cycle the device. Hopefully this gets fixed by an update soon.

The GoogleTV is a really sweet device. Probably the best measurement of it’s usefulness, is the quickness with which my Dad picked up on it. I basically just handed him the keyboard and he was off to the races. The wifi problems and media streaming are still too complicated for him to use, but he browses the web and listens to Pandora without needing any help whatsoever.

If you’re looking for something like the Apple TV or Boxee Box, GoogleTV should definitely be considered. Like Android and most other Google products, give it a few more months and this thing will blow the rest of its competitors out of the water.

Here’s the full list of images I took of the device. Pardon the quality, I need to get buy a nice camera sometime. 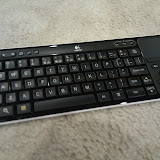